Lori Bookstein Fine Art is pleased to present “Stephen Antonakos: Spaces,” an exhibition of the artist’s exploration of the deep, crucial bond between geometry and space. “Spaces” has been assembled to illuminate how a few specific works – of different media, scale and date of creation, including a wall sculpture, three works on paper and an architectural model – may, when placed in relation to each other, animate and even redefine the proportions of the gallery space. This the artist’s second one-person show at Lori Bookstein Fine Art.

The exhibition highlights the relations between the spaces in individual works as well as the relations between each form. The model for Meditation Space plays a special role because, although it occupies a reduced scale, the viewer may imagine it with the full scale of its interior space (28 x 24 x 24 feet).

Antonakos began making Chapels and Meditation Spaces in the late 1980s, as formal, intimate spaces in which “the inner person,” as he puts it, may feel an openness, a fuller presence than is usual in the workaday world outside. Like many of Antonakos’s public works made from various units, it is the work in its entirety, seen at once or seen sequentially, that provides the experience.

An incomplete circle drawing from 1978 has a kinetic presence as well as a visual one, partly because of its human scale and also because of the tension in the position of its form on the paper. Two small, solid “block and oval” drawings on vellum, made over 20 years later, offer a taut dialogue between the two forms as well as between the ovals and their spaces.

Ambiguous and playful, as in most of Antonakos’s work there is an implicit movement which rewards long viewing. The almost-opaque colored pencil forms of the drawings play off of the almost-solid color in the painted surface of the Panel Plea. Throughout, Antonakos’s decades-long dialogue with light continues. The artist says, “It is hard to separate space and light.”

Stephen Antonakos was born in Greece in 1926 but has, since the age of four, lived and worked in New York. He began exhibiting in the late 1950s and began working with neon, his signature medium, in 1960. He has shown work in over 100 one-person shows and over 250 group shows. His work is in many important museum and private collections throughout the US, Europe and Japan. He has also installed over 50 permanent public works internationally.

Two new public works have recently been unveiled to the public in Athens, Greece: an outdoor work commissioned for the inaugural exhibition of the new Onassis Cultural Center, and a site-specific neon sculpture in the reception area of the offices of the National Museum of Contemporary Art. On June 4th, Antonakos will become the current recipient of the Greek American Lifetime Achievement Award; he has also recently been awarded the Lifetime Achievement Award for Sculpture by the National Academy Museum.

“Stephen Antonakos: Spaces” will be on exhibit through June 25, 2011. Gallery hours are Tuesday through Saturday, 10:30 to 6. For more information or visual materials, please contact the gallery 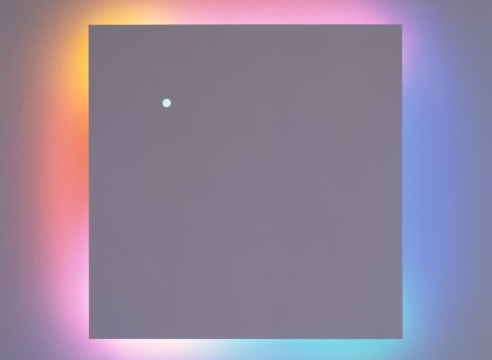