Sharon Horvath: Cosmicomics will present a series of new paintings ranging in scale from several inches to
several feet. The show’s title is taken from Italo Calvino’s collection of stories by the same name. In his book,
Calvino explores scientific conceits and the evolution of the universe by relating them to the ordinary interactions
of common humanity. Even Calvino’s characters, which have such impossible-to-pronounce names as Qfwfq and
Xlthlx, are abstracted notions of mathematical formulae and cellular structures that have been
anthropomorphized into relatable characters that embark on otherwise other-worldly adventures.

Horvath’s recent paintings represent a very similar albeit homegrown and patch-worked mythology. In the work,
newspaper photographs have been collaged into the otherwise dim holes of the paintings. They absorb
themselves into the painted surfaces of the planetary orbs, almost as if they were firmly footed by gravitational
force or cosmic accident. In others, the larger composition seems to be molded around particular, yet ostensibly
unrelated life forms. Car armrests look like seal flippers and snakes appear to be filled with stars. Indeed, the
artist draws her influence from such disparate sources as Indian Ragamala paintings, the abstract paintings of
Swedish artist and mystic Hilma af Klint, Sienese paintings and even the childhood memories of her parents’
collection of weavings, paintings and ceramic figurines.

In Gallery II, Sharon Horvath: Varanasi Notebook will present works on paper executed on the artist’s
recent Fulbright-Nehru U.S. Scholar Grant to India (during Horvath’s sabbatical from Purchase College, SUNY
2013-14.) The series are named for the sacred city of Varanasi where most of the drawings were executed during
a stay at the Kriti Gallery residency and for the towns where the Indian ledger paper was purchased. Works on
paper on view are selections from the three series: the Varanasi Notebook, Khajuraho Notebook, and Sanganar
Notebook.

Sharon Horvath (b. 1958, Cleveland, OH) received her BFA in from Cooper Union, New York and her MFA from
Tyler School of Art, Philadelphia. She is an Associate Professor of Art at Purchase College, SUNY. Horvath has
been the subject of numerous exhibitions in New York, Philadelphia, Boston, and abroad. Her numerous awards
and grants include the Fulbright-Nehru U.S. Scholar Grant, John Simon Guggenheim Memorial Foundation Grant
for Painting, the Jacob H. Lazarus-Metropolitan Museum of Art Rome Prize from the American Academy in Rome,
the Anonymous was a Woman Award, the American Academy of Arts and Letters Richard and Hilda Rosenthal
Award for Painting, the Edwin Palmer Prize in Painting from the National Academy Museum and two Pollock-
Krasner Foundation Grants. The artist lives and works in New York City.
Sharon Horvath: Cosmicomics and Sharon Horvath: Varanasi Notebook will be on view from October 9 –
November 8, 2014. An opening reception will be held on Thursday, October 16th from 6-8 pm. Gallery hours are
Tuesday through Saturday, 10:30 am to 6:00 pm. For additional information and/or visual materials, please
contact Joseph Bunge at (212) 750-0949 or by email at joseph@loribooksteinfineart.com. 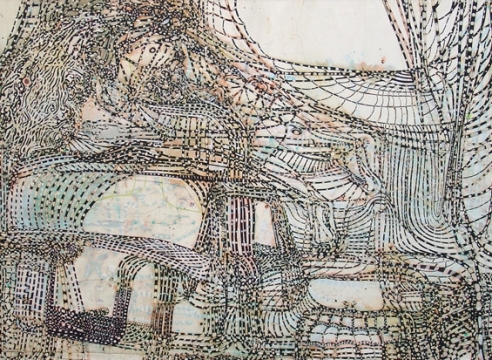