In 1943, Joaquín Torres-García created "The School of the South" in the form of a workshop - El Taller Torres-García. He preferred that were unspoiled by previous art training. Among the many who were attracted by his powerful message and charismatic personality, a handful were exceptionally talented: Julio Alpuy, Gonzalo Fonseca, José Gurvich, Francisco Matto, Manuel Pailós, and the artist's two sons, Augusto and Horacio Torres.

For these young artists, El Taller provided an experimental training ground and a unique space for testing the applicability of modernist principles to the American setting. One of the outstanding aspects of the workshop was its goal of integration of the arts into a total unified environment very much in the tradition of European arts and crafts movements. But Torres-García rejected the industrial, technological orientation of those precedents and instead the members of El Taller Torres-García experimented with simple materials and innovative techniques. [i]

After Torres-García's death in 1949, El Taller Torres-García continued to function for over a decade under the direction of some of the older members. These years represent a period of mature development and experimentation for the seminal group of El Taller artists (Gonzalo Fonseca, José Gurvich, Francisco Matto, Manuel Pailós, Horacio Torres), marked by the flourishing of their individual personalities and styles. [ii]

Working within the collective aesthetic of El Taller Torres-García, and always searching for creative solutions to the material limitations of their context, they engaged in projects that encompassed a broad range of media, and produced a wide range of works from traditional paintings and sculptures to furniture and decorative objects. This period also saw their incursion into architecture as part of the aim of integration of the arts, as well as public projects. By the late 1950's, however, the principal members of El Taller Torres-García had left Uruguay in order to pursue their own careers. [iii]

After the official demise of El Taller in 1962, the seminal group of El Taller Torres-García artists continued to develop key aspects of Torres-García's teachings from their own perspectives, and through them a new generation of artists has been influenced by the Uruguayan master's art.

Another America: Selections from El Taller Torres-García will be on view from April 24 – June 1, 2019. A reception will be held on Wednesday, April 24th from 6:00-8:00pm. Gallery hours are Tuesday through Saturday, 11:00 am to 6:00 pm. For additional information and/or visual materials, please contact the gallery at (212) 750-0949 or by email at info@booksteinprojects.com.

Julio Alpuy (1919-2009) was an original member of El Taller Torres-García, he was instructed by Torres-García to teach drawing and painting at the Taller. He left Uruguay in 1957 for extended stays in Colombia and Venezuela before arriving in New York in December 1961 living here until his death.

Gonzalo Fonseca (1922-1997) abandoned his university architectural studies at age 20 and joined El Taller. To realize his interest in ancient sites and archeological digs, Fonseca travelled widely, beginning in 1946 to Peru and Bolivia, in the 1950s he spent 6 years between Rome, Paris, Madrid and the Middle East. In 1958 he moved to New York and beginning in 1970 he spent half the year in Carrara working with marble.

José Gurvich (1927-1974) joined the Taller in 1945 where he later organized a ceramic studio and taught classes in drawing and painting. Gurvich's artworks are populated with figures and images that reflect his Jewish upbringing, his participation with El Taller Torres-García, and his profound admiration for the Flemish masters Breughel and Bosch. He combined a unique personal style with technical mastery.

Francisco Matto (1911-1995) sailed from Montevideo down the South Atlantic coast and around Tierra del Fuego to Chile when he was 21. There he acquired his first ethnographic pieces for what would become an important collection of pre-Columbian art that was a source of inspiration for him. In 1939, Matto met Torres-García who encouraged him to continue painting even though it wasn’t until 1943, when he joined El Taller Torres-García, that Matto began working as a Constructivist.

Manuel Pailós (1918-2004) studied painting at the Circulo de Bellas Artes in Montevideo before joining El Taller Torres-García in 1943. Profoundly influenced by Torres-García's theories, Pailós was an important member of the Taller. In addition to his drawing and painting, Pailós made sculptures in wood, granite, and other materials, and many of his reliefs and free-standing works are now in public spaces in his native Spain and in Montevideo. Due to their fondness for working with wood, the El Taller Torres-García artists were called "Torres-Garcia's carpenters."

Augusto Torres (1913-1992) was the first son of Torres-García. He began his lifelong collecting and interest in the American Plains Indians and African tribal art when in Paris at age 14. He also worked at the Musée de l’Homme cataloguing preColumbian vessels and as a studio assistant to the sculptor Julio González. For Augusto Torres, poetry and metaphysics is what his still life paintings bring to art - for they exist when the artist assumes the real world within his spiritual world, and as he expresses and structures the real world pictorially, he also expresses the real soul of objects.

Horacio Torres (1924-1976) is the youngest child of Torres-García. He was 10 when the family arrived in Montevideo. After the Taller years, Horacio traveled abroad, living in Paris before returning to Uruguay. In 1969, he brought his family to New York where his extraordinary paintings of nudes were purchased by major museums including The Metropolitan, Museums of Fine Arts Boston and the Museum of Fine Arts Houston, among others. 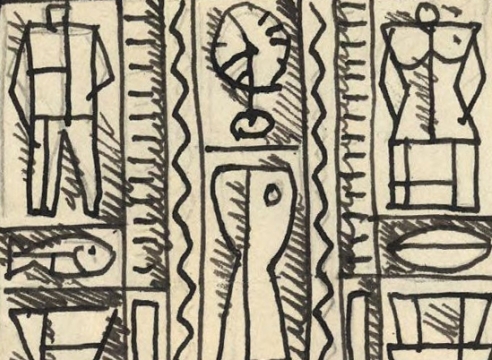