Lori Bookstein Fine Art is pleased to announce an exhibition of paintings by Anne Tabachnick. This is the artist's fifth solo show at the gallery.

Anne Tabachnick: Object as Muse will survey the artist’s career-long fascination with still life through several mural-sized paintings. A self-described “lyrical expressionist,” Tabachnick could be at once grounded to and disconnected from her subject. In “Blue Quilt–MacDowell” (1971), she chooses the most traditional of items for a still life study (a melon, a vase, a bouquet of flowers) but disperses them across an ethereal blue ground, arranged loosely along an imperfect grid. The objects depicted in her paintings, while filled with the essence of the thing represented, come together to transmit an abstracted state of the world which has decidedly little to do with reality.

Anne Tabachnick: Object as Muse will be on view from January 8 – February 7, 2015. An opening reception will be held on Thursday, January 8th from 6-8 pm. Gallery hours are Tuesday through Saturday, 10:30 am to 6:00 pm. For additional information and/or visual materials, please contact Joseph Bunge at (212) 750-0949 or by email at joseph@loribooksteinfineart.com. 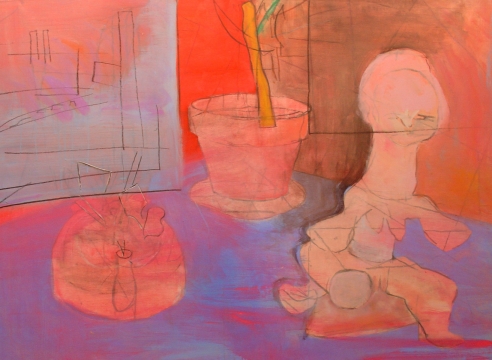