Lori Bookstein Fine Art is pleased to announce an exhibition of new drawings by Helen Miranda Wilson. This is the artist's fourth solo show at the gallery.

Almost from the beginning of her life as an artist, Helen Miranda Wislon made drawings in pencil on paper, without the use of line. This suite of twenty drawings were done in 2013-2014, one after the other, over several months in midwinter.

In the show she revisits the medium, using it for the first time to make images without realistic, representational subject matter.

The surfaces are covered by mists of pewter grey, textured by the paper. At times the pencil is so densely applied that it gives off a sheen, describing forms which despite their small size, can stun our eyes. At others, the lighter background shows through a penciled veil. It is almost like seeing air as a breathing, quantifiable substance.

This is the first time Wilson has had a solo exhibit consisting only of drawings in one color, although a series in the 1970s (of people and things) and also in the 1990s (of night skies) were included in past shows.

After living for decades in New York City, Wilson now makes her home in Wellfleet, Massachusetts. She works as a public servant in the town’s municipal government and maintains a small scale farm. She has kept honeybees and chickens successfully for many years. She paints full-time and teaches occasionally. 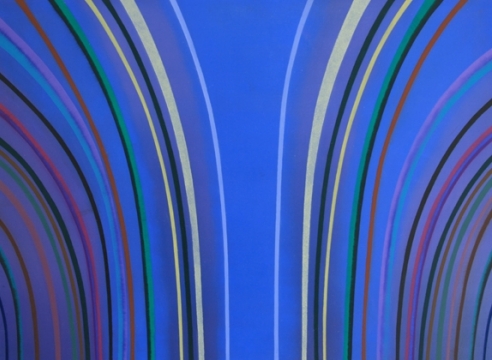