Lori Bookstein Fine Art is pleased to announce an exhibition of paintings by Jan Müller. This is the artist's third solo show at the gallery.

This exhibition will be comprised of nearly twenty paintings and will attempt to illustrate Jan Müller’s artistic trajectory away from abstraction towards figuration. Beginning in the late 40s under the tutelage of Hans Hofmann, Müller maintained primarily formal concerns. His early mosaic paintings from this period emphasized a strong focus on color and geometric from. As his career progressed, and his preoccupation shifted, Müller was confronted by the limitations of formalism in conveying the human condition. The mosaics began to utilize color and form in a new way, whereby individual tiles coalesced to articulate the likeness of the human figure. Eventually, the artist would focus his attention on the human figure and more largely human consciousness through series of complex allegorical paintings, thus leaving behind pure-abstraction entirely.

The variety of materials that Müller painted on reinforces the fury with which he explored the psychology of man through painting. Ranging from canvas to burlap to wooden shingles, the support in each of these paintings adds distinct texture and depth to the figures that rise through the mosaics. The total effect is a heightening of the tandem psychological-complexity and formal-simplicity of these works. Indeed, Meyer Schapiro has so eloquently described the artist’s transition as one “from abstract mosaics to a mosaic of nature and figures with simplicity and breadth.”

Jan Müller was born in Hamburg, Germany in 1922.  His father was a political activist who fled from Hitler in the 1930s, emigrating with his family to the U.S. in 1941.  Müller studied painting under Hans Hofmann from 1945-50.  In 1954, Müller underwent heart surgery during which a plastic pacemaker was implanted.  This constant reminder of the passage of time is perhaps, in part, responsible both for the fury with which he painted until his death in 1958 and the urgency with which he made the radical and courageous shift from abstraction to figuration.

Jan Müller’s work has been included in exhibitions at the Whitney Museum, the Museum of Modern Art, The Jewish Museum, and the 1962 Venice Biennale among others.  The artist regularly showed with the Hansa gallery, of which he was a founding member, until his untimely death.  A seminal work by Jan Müller is currently on view at the Museum of Modern Art in the exhibition Soldier, Spectre, Shaman: The Figure and the Second World War, on view through March 20, 2016.

Jan Müller: From Mosaic into Man will be on view from February 4 – March 12, 2016. An opening reception will be held on Thursday, February 4th from 6:00 – 8:00 PM. Gallery hours are Tuesday through Saturday, 10:30 AM to 6:00 PM. For additional information and/or visual materials, please contact Joseph Bunge at (212) 750-0949 or by email at joseph@loribooksteinfineart.com. 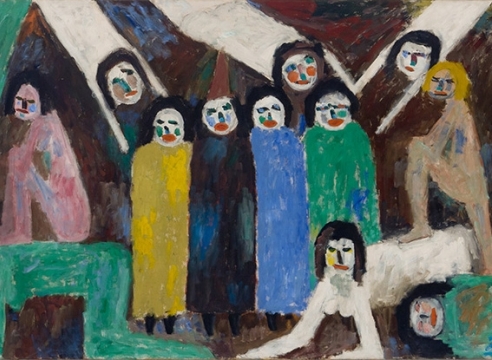