Lori Bookstein Fine Art is pleased to announce its fifth one-person show of the work of John Dubrow. The exhibition will be comprised of three recent cityscape paintings, accompanied by six portraits of the artist’s friends and colleagues.

Dubrow’s new Bleecker Playground series re-imagine the pastoral tradition as he continues his two decade-long pictorial investigation of contemporary urban life. These paintings are free-associated in the studio, from onsite notes and the artist’s memory of the motif, without the use of photography. Developed over a period of many months, sometimes years, the compositions are in flux until their completion. This shaping and re-shaping of structural space over a protracted period turn time into an integral element of the paintings; the surfaces seem to hold the memory of the history of their making.

The six portraits in the show (including the painters William Bailey, Tine Lundsfryd and Ruth Miller and the poet Mark Strand) are also amalgams of multiple experiences but in a very different way than the cityscapes. They are painted, at least in part, from life under highly pressurized conditions. Again, time is an essential element, but in these works, time is also characterized by the many days and intimate exchanges with the subjects in their environments. In each portrait, Dubrow finds a formal construction which becomes a metaphor for the sitter’s personality. Interior scale, color, or an oblique angle all stand on their own as formal elements while simultaneously taking on particular significance to the individual.

Whether urban landscape or portrait, Dubrow’s new paintings are unified by a fullness of expression that comes from a new synthesis of ideas and impulses from various stages of his career. They continue the artist’s recent interest in flat shape and color while returning to a more volumetric sense of form and a further exploration of the dynamics of rhythmic movement set into compositional space.

John Dubrow was born in 1958 in Salem, Massachusetts. He attended the Camberwell School of Art in London (1978-79), followed by the San Francisco Art Institute (1979-83), where he studied painting under Bruce McGaw and Julius Hatofsky. Since 1983, Dubrow has been based in New York City. His paintings may be seen in public collections including the Metropolitan Museum of Art, the Dubois Institute at Harvard University, the Hilton Hotels Corporation, the New Republic and the National Academy of Design. He is the recipient of a Pollock-Krasner Foundation Grant, the National Academy of Design’s Truman Prize and Carnegie Prize and the Port Authority

JOHN DUBROW New Paintings is on view September 15 through October 16, 2010. Gallery hours are Tuesday through Saturday, 10:30 am to 6:00 pm, and by appointment. For additional information or visual materials, please contact the gallery at (212) 750-0949 or info@loribooksteinfineart.com. 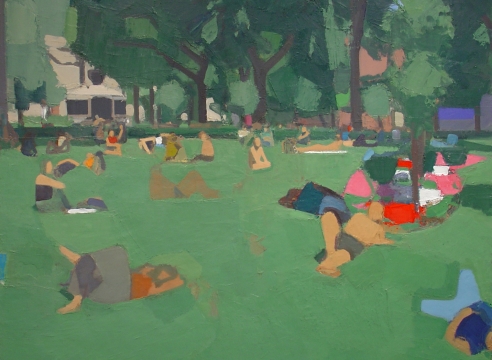