Lori Bookstein Fine Art is pleased to announce an exhibition of fine art by the architect Louis I. Kahn [1901-1974]. This show will consist of work with park-related themes and will coincide with the opening of the Four Freedoms Park on Franklin Delano Roosevelt Island on October 24, 2012. The Four Freedoms Park is New York City's first architectural structure by Louis I. Kahn. This is the third solo-show of Louis I. Kahn's work at Lori Bookstein Fine Art.

Louis I. Kahn: In the Park will bring together some fifteen works – drawings, watercolors and paintings – dating from the late twenties to the late fifties. Executed on his many travels around the world, the work documents parks, trees and other landscapes from at home and abroad including those from Philadelphia, the Adirondacks, the Borghese Gardens and Greece. Just as parks can best be described as intermediate zones that are both feral and domesticated, natural and manicured, so too did Louis I. Kahn maintain his dual identity as both artist and architect.

Louis I. Kahn: In the Park will be on view from October 11 through November 10, 2012. An opening reception will be held on Thursday, October 11th from 6-8 pm. Gallery hours are Tuesday through Saturday, 10:30 am to 6:00 pm. For additional information and/or visual materials, please contact the gallery at (212) 750-0949 or by email at info@loribooksteinfineart.com.

Louis I. Kahn: In the Park is presented in association with Archtober,  Architecture and Design Month New York City, October 2012. For more information on Archtober and other events please visit their website at www.archtober.org. 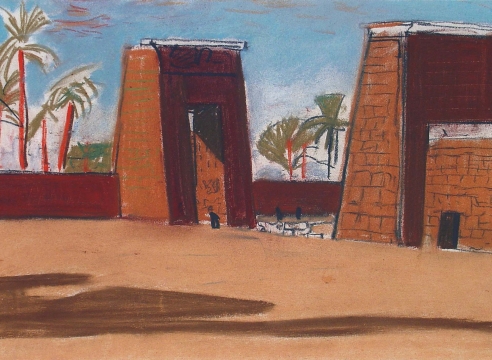