Bookstein Projects is pleased to announce an exhibition of figure paintings by Susannah Phillips. This is the artist’s sixth solo-show with the gallery.

This exhibition will consist in a group of paintings, made between 1998-2006, depicting a unique model. While the artist is well-known for her quiet still lifes, interiors and landscape paintings, her figurative work is largely unknown. Composed in her earlier palette, this body  of work, nonetheless, has the signature moody atmosphere and contemplative quality of the rest of the artist’s oeuvre. By limiting herself to a single motif, she opens up a world of creative possibilities in form and color.

The paintings offer up a (regrettably rare) opportunity to explore the female gaze on the female form. Phillips first met her model, Allison Katz, an art student at the time, in 1998. There began a working relationship and friendship that proved fruitful for both. Phillips had found a beautiful live model; Katz had found a kind of art-mentor.

For the next eight years, Allison came to the studio roughly once a week. Their deepening trust and friendship was reflected in Phillips’ treatment of the subject, moving from early compositions which considered the figure – clothed -  as a type of still life, to horizontal nudes in the tradition of the odalisque.

Around 2004, toward the end of this series, Phillips added the artist figure – a surrogate for herself -  on the right of the picture.  Not only did this increase the dynamism of the composition, but it also added another gaze into the painting – that of the artist gazing upon herself.

Susannah Phillips was born in 1952 in Boston, Massachusetts but was raised in London. She attended the Slade School of Fine Art in London, studying under William Coldstream and Euan Uglow. Her paintings have been in exhibitions in London, New York, Montreal and Provincetown, MA, and are included in numerous private collections. In 2014 and 2017, she was awarded the Josef and Anni Albers Foundation Residency. The artist lives and works in New York. 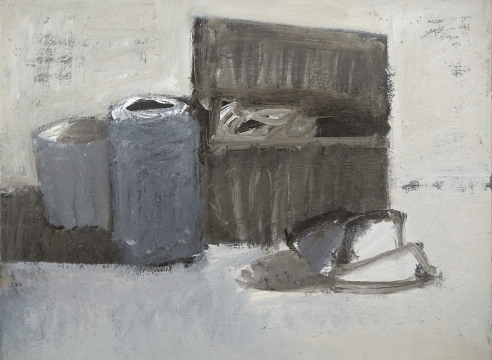