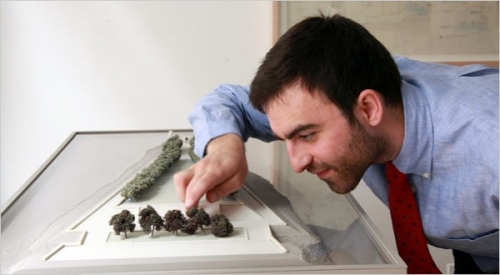 Stephen Martin, 25, an architect and Frank Gehry-phobe, was raised in the suburbs of Denver and graduated from Cooper Union’s architecture school in 2008. He works for Franklin D. Roosevelt Four Freedoms Park L.L.C., which is building a memorial park designed by Louis I. Kahn at the southern tip of Roosevelt Island. His work there includes organizing construction documents, building scale models and helping with fund-raising.

Your name is Steve Martin, like the comedian/writer? Discuss: Indeed it is, though I usually go by Stephen. I wasn’t named after Steve Martin, nor am I related. I could only wish.

Why architecture? My dad was more practical; he worked in computers and tech. My mom had a more creative side. I always had a thought that architecture melded the two. It’s practical but also potentially very beautiful.

The first thing you built: My dad started out as a carpenter. We always had a lot of woodworking around us. I remember drawing out treehouses, laying out the wood with my dad, and building them. And dreaming about them with my mom. We would build bookshelves, do renovations around the house. That was huge, having that environment.

Taking the leap: To be honest, when I applied to Cooper, I really didn’t think I would get in. It’s so small. I kind of applied and hoped for the best. I was thrilled to get in. I just loved it. I graduated with I think 26 people in my architecture class.

Post-collegiate woes, and breaks: It was really hard to find work. While I was at Cooper I worked for two architecture publications. But the publishing and the architecture industry really suffered in 2008. So I decided to pursue internships. I worked in the archives of Isamu Noguchi, Buckminster Fuller and Alexander Calder.

Getting the Louis Kahn job: Noguchi worked very closely with Louis Kahn, and I came across a lot of drawings that Noguchi and Kahn had designed together for New York that never came to fruition. I called Gina Pollara, the executive director of the Roosevelt park project, who used to work at Cooper Union, and expressed interest. I was brought in in June 2009.

Favorite architect: No joke, it’s Louis Kahn. I’m not just saying it because this project is his. Each building is based on a very simple geometry. You have a cross, a circle, a triangle. It’s just based on a very pure form.

Favorite New York building: Grand Central station. The central space is beautiful. The feeling is so amazing, the light is spectacular. And the energy in the building, morning, noon and night, is incredible.

Do you think Frank Gehry is overrated? Yes, of course. I mean, as do lots of people. I don’t know how thought out Gehry’s spaces are. They’re kind of a mishmash of forms. When you put a person in there it feels like it wasn’t made for the person — it was made for Frank Gehry.

On the glass condo epidemic in New York: Well, I find it kind of funny. You have all of these glass condos, but everybody’s putting up crazy curtains. They’re glass, but everyone at the end of the day wants to close curtains. It looks kind of funny, all the random curtains they put up. Either that or you get to see all of people’s clutter. So the joke’s on them.