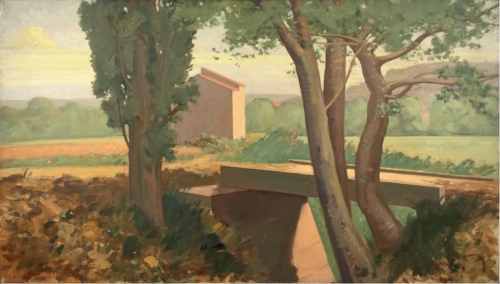 Still Painting After All These Years
Andrew L. Shea | October 2020

While others have postured, Paul Resika has kept on painting. Andrew L. Shea visits Paul Resika in his Upper West Side Studio.

On March 14, 1847, Eugène Delacroix made a trip to the studio of his colleague and countryman Camille Corot. Later that day, Delacroix recorded in his journal a feeling of newfound appreciation for the painter’s landscapes: ‘Corot is a true artist. One has to see a painter in his own place to get an idea of his worth.’ The Corot paintings that Delacroix had recent-ly viewed at the Paris Salon seemed to hold new meaning after his seeing the site of their creation. As to exactly what had changed, or what he saw that changed it, Delacroix does not — perhaps could not — tell us.

Few modern painters can claim as close a kinship to the spirit of Corot as Paul Resika. I visited Resika, who is now 92 years old, in his studio, a large, open space on Manhattan's Upper West Side that he’s been working in since 1974. Surely among the last of its kind in New York’s central borough, the studio occupies the top floor of a disheveled five-story walkup that, in the early 20th century, housed William Merritt Chase’s influential school of art. The studio is a touch leaky, it barely runs electricity and it definitely lacks WiFi. What it does have, though, are ample, north-facing windows cut out of the roof that let in clear, abundant, dependable sunlight from dawn till dusk. It’s the ideal light for making paintings.

And for looking at paintings. Hanging on the walls are a series of new works that, Resika explains, derive from an obscure engraving made of a panel from an altarpiece predella by Fra Angelico on the life of St Nicola of Bari. Angelico’s original scene, which dates to 1437, depicts the haloed figure and some workmen in the foreground, with three ships riding roiling waves into the harbor behind. Resika’s treatment ranges from quasi-faithful, with many of Fra Angelico’s subjects still in place, to almost totally abstract. In perhaps the largest painting, a lone robed figure stands within a pulsating field of cadmium red, looking off to three small forms that sit back in the misty distance yet simultaneously pull forward to the picture plane as circle, rectangle and triangle (see p. 43).

The painting, ‘Allegory (San Nicola di Bari) #15’, is also the last and most recent work included in Paul Resika: Eight Decades of Painting, a new monograph from Rizzo- li that is the first to assess comprehensively this modern master’s lifelong experiment in paint. Edited by Blair Resika, the artist’s wife, the volume reproduces more than 200 artworks that date as far back as 1940, when Paul was just 12 years old. Complementing these images are four critical and historical essays by Avis Berman, Karen Wilkin, Jennifer Samet and John Yau, as well as numerous excerpts from contemporaneous writings, placed alongside the artworks they discuss.

An only child born in 1928 and raised in Harlem, Resika was encouraged to paint early on by his mother, an immigrant from Russia who ‘loved Rubens and Stalin’, he recalls with a laugh. At 16 he found his way to night classes in Hans Hofmann’s school, a hotbed of avant-garde artists. Hofmann, who had known Matisse and Picasso as a young painter in Paris, employed the age-old tradition of working from the nude model, but used it to teach thoroughly modernist pictorial ideas: ‘With Hofmann you had to draw forces; there were no things,’ Resika later recalled. ‘Everything was about relationships.’

Auspicious results under Hofmann sent Resika into the rarified orbit of leading painters from the New York scene. Before he turned 20, his Cubist- inflected works were earning Resika exhibition opportunities, notices in the New York Times, and the attention of tastemakers like Clement Greenberg and collectors like Leo Castelli. But despite these early successes, Resika felt he was missing a crucial foundation in anatomy and academic drawing. Soin 1950, at a moment when artists around the world were moving to New York to seek out the bright lights of Abstract Expressionism, Resika decamped to Europe. On a parental allowance given in lieu of college tuition, he moved to Paris, then Rome, then finally Venice — to gain his education from the great masters of the western tradition. Resika returned to New York in 1953, but his newly dark and shockingly old paintings kept him in aesthetic exile. Then, after a few years spent making portraits of friends and family, in 1958 Resika began to paint the landscape en plein air. He rented a house on Long Island for the summer of 1959 and painted alongside Paul Georges and Fairfield Porter, two other artists who bucked the trend of abstraction to make naturalistic scenes from life. Plein air work became an essential aspect of Resika’s practice, and Corot his god. While battles raged in the States over the latest trends in an ever-accelerating modernism, Resika returned to Europe to walk the land and paint the views that the Frenchman had captured centuries before.

Corot, of course, was just one of countless artists from history to consider. In 1967 and ’68 Resika spent the summer in the south of France at Vaucluse, Provence. Given Cézanne’s immortal paintings of the region, going to Provence to paint landscapes is a bit like deciding to write a stream-of-consciousness novel after a day spent wandering the streets of Dublin. Yet in ‘The Bridge, Vaucluse #2’, Resika makes the subject his own. Resika renders the landscape with full-bodied paint, handling the sharp, clear light of southern France with a tactile weight that you feel as if you can pick up. Taking cues again from Corot, who claimed to be ‘never in a hurry to reach details’, Resika simplifies the titular walking bridge and the terracotta-roofed house in the middle distance down to their essential geometries.

Years went by, and wherever Resika went, he painted. His landscapes became progressively more saturated in color, taking them out of the natural, observed world and into the dream-like visions of a Fauvist Arcadia. Still, in the best of these works Resika somehow manages to retain an acute sense of particular light. You’ve likely never seen a harbor look quite like Resika plays it in ‘Provincetown Pier (Claude)’ (1984-86), yet the painting’s unreal colors and tones, lines and forms, combine to evoke a sensitively perceived sunset.

Cézanne is reported as having declared a desire to ‘do Poussin over from nature’; here, Resika does Hofmann over from nature. Despite the recognizable boats and shacks and pier, the painting’s real subject is the ineffable, almost musical relationships of line, color, weight and space that Resika brushes into his chosen rectangle, like the violinist who understands that the artistry isn’t merely in hitting all the notes, but in probing one’s way through the composition with presence and feeling. As man-made structures disintegrate into passages of pure color and light, we’re reminded of Hofmann’s lesson: there are no ‘things’ here, only forceful relationships between formal elements.

Resika made countless paintings of this single stretch of waterfront buildings on the Provincetown Pier, returning to it again and again for new ideas, so that it became, like Cézanne’s Mont Sainte-Victoire, perhaps his most recognizable subject. But as time went on Resika’s maritime views of boats and piers began to retreat further away from the natural world. Conceivable spaces collapse onto the surface of the picture plane, dissolving into fields of vibrating colors and shapes. To these Resika sometimes adds sensitively observed still life objects — fish, say, or seashells — to create strange combinations with surrealist tension. Elsewhere we find Matis- sean pastoral nudes, flowers in vases, birds-eye views of lily pads and, finally, those Fra Angelico-inspired narratives of ships coming into harbor. Very different kinds of paintings, but with a distinctive and similar energy running through them all.

Just what sort of energy? Perhaps it has something to do with the sun that floods into his studio through those north-facing skylights, and with the knowledge Resika carries in his pocket after decades spent painting outside. Once more we turn to Corot, who, in describing the fugitive thrill of plein air painting, happens upon a key to the light-filled works of Paul Resika: ‘Oh, would I were Joshua — I would command the sun to stand still. And if it should, I would be sorry, for nothing ever did stand still, except a bad picture. A good picture is full of motion. Clouds that stand still are not clouds — motion, activity, life, yes, life is what we want — life!’

Paul Resika: Eight Decades of Painting (ed. Blair Resika) is published by Rizzoli ($75). A selection of paintings from the monograph is on view at Bookstein Projects, 60 East 66th St, New York City until October 24.