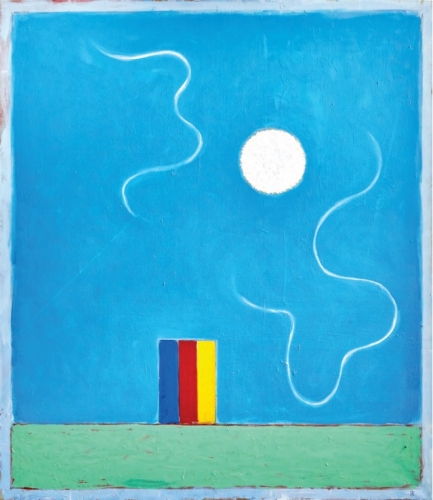 PAUL RESIKA: EIGHT DECADES OF PAINTING, edited by Blair Resika and structured into four phases of twenty years each of her husband’s relentless inquiry into the pictorial possibilities of paint, is a major examination of a lifetime of work. The text shifts fluidly between the visual thinking apparent in the range of sumptuous color reproductions and vivid illuminations in essays by Avis Berman, Karen Wilkin, Jennifer Samet, and John Yau—essays punctuated by remarkable insights from fifty prominent commentators, including many of the poets that Resika has been reading, and pondering, through the serpentine cycles of an exemplary career.

When Resika appeared on the cover of Provincetown Arts in 2004, John Yau wrote, “When I think about the course that Paul has taken over the past twenty years, from the pier to the boats to the recent paintings of a woman alone, I see his real subject being the polymorphic nature of paint—the artist is reflecting on the relationship between materiality and immateriality, the solid world and the dissolving power of light and water.” The constant in Resika’s work is an ongoing encounter between substance and shimmer, what the thing is and what elemental emotion is evoked by an aspect of the thing.

Resika’s most recent paintings, four of which conclude the book, suggest how the ephemeral exists as enduring memory. Some deep impulse inclined Resika to thumb through the pages of an enormous tome he had purchased forty years ago in a rare bookstore in Lower Manhattan, one of four volumes of etchings depicting every item in the vast Vatican collection. He was drawn to an engraving of a work by Fra Angelico, “which did not look anything like a Fra Angelico,” Resika told me in a recent phone conversation. Derived from the predella of a triptych painted by Fra Angelico, the etching depicts St. Nicolas meeting with several public officials along the Mediterranean trading port in Bari. Multiple narratives unfold in the work; sacks of grain are being loaded onto a ship, which itself is in distress, but is simultaneously saved by the divine intervention of radiant light.

Often, an orb or sun or moon, something round in the heavens, looms in a Resika painting. He told me, “I saw this scene with people lifting sacks of flour, while something miraculous was going on around them.” In early depictions of this scene, including the one shown here, Resika has blurred the sharp outlines of the original, casting an Impressionist haze over the forms, as if seen from a more remote distance. Out of the narrative depicted by Fra Angelico, Resika has dramatically reduced its details, vaporizing the quotidian activity
on the waterfront of the Mediterranean trading center, and radically revealing the fundamental life forces that animate mundane activity.

I am reminded of Resika’s haunting nocturnes of small bonfires on beaches along Truro’s Corn Hill, the gathered figures flickering like shadows surrounding the glowing center. Resika remembered a comment by his departed friend, the writer Arturo Vivante, who said the figures looked “ancient,” which Resika took to mean “out there in the land of the imagination, back to where I was years and years ago, and not really abstract pictures in that sense.”

Even more striking are Resika’s radical departures from figuration in later paintings in the San Nicola di Bari Allegory series, in which associations are loosened from their source and perform as plastic forms, their weights and proportions engaged in a thrilling harmony between the geometric and the biomorphic, the inorganic and the organic. His paintings express an inward vision in which the physical man appears sub specie aeternitatis, governed by eternity, a perspective only available to myth, which perhaps explains why Resika’s paintings are pervaded by references to classical myth.

When I first saw Resika’s Allegory (San Nicola di Bari) 152, I thought I may have blundered into Matisse’s Red Studio, the chromatic intensity recalling the famous depiction of the artist’s working space, the whole atmosphere in red except the white outlines of furniture, plants, and paintings, with the artist absent. Resika, too, is impersonal and self-effacing regarding the source of his talent— “That’s good! Did I do that?” he asks.

In Resika’s red painting, intense brightness is concentrated in the celestial sphere—its moonlight is blinding. There is mystery in echoing movements of three moons, drifting off, without moonlight, as their shapes become absorbed in the red ground. These three moons are the fading afterimages spawned by the flash of bright light. Resika has painted the physiological reaction of the eye following a bright flash, showing flashbacks in color. Appearing in this consecrated atmosphere, three holy figures are huddled in conversation, each figure distinguished by the color of their clothing, from left to right, blue, red, yellow.

These three sketched figures sheathed in colored robes become, in a related painting— Allegory (San Nicola di Bari) #13—three uniform rectangular towers, red, blue, yellow, arising from a neutral ground, the unblinking moon agitating the air into arabesques of linear currents. People are replaced by primary colors. The white miter that crowns the bishop’s head gleams with the same brightness of the moon, which seems to function as a prism, receiving a single beam of white light and dividing into three spectrums of chromatic components. Resika is blending Euclidian geometry with biomorphic proportions, creating spare, selective elements placed in a tableau with the reverence of an altarpiece. Furthermore, there is an optical ambiguity in the structure of the three vertical towers of color arising from the base of the painting. This block of colors can be read as three flat surfaces or as a three-dimensional building in which the yellow becomes the side of the red tower.

“All my pictures have a geometric system,” he said. “Take the smaller side and lay it down on the longer side, and that gives you the first division, if the canvas is a rectangle. Like the golden section but not so extreme. I didn’t learn that from Hofmann. As soon as I saw
the Old Masters, I saw what they did—before any figures or subject was there, the division was there.”

CHRISTOPHER BUSA was the Founder and Editorial Director of Provincetown Arts.