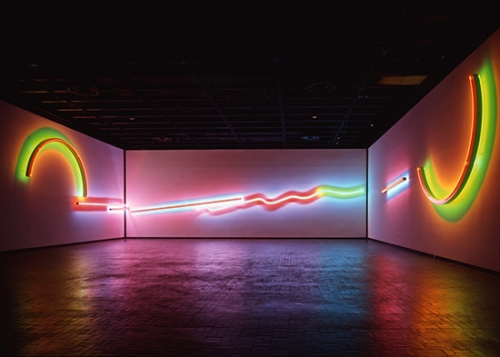 These transcribed remarks, edited slightly for publication, were delivered in the course of a panel discussion at the New York Studio School on March 20 2018. The other speakers that evening were Phong Bui, Vincent Katz, Daniel Marzona and Helaine Posner. The twin exhibitions at the Neuberger to which the remarks refer, NEON- Stephen Antonakos: Proscenium, and Bending Light: Neon Art 1965 to Now, are on view through June 24, 2018

Looking at the magnificent Proscenium the other day at the Neuberger Museum made me think of a building, or perhaps more accurately, a monument that had been taken apart, its components lighted like all monuments are, especially monumental ruins. In fact, it looked like a Greek temple to me. Not just because Stephen was Greek but also because I have, as many of us have, our own romance with Greek temples, with ruins, with the thought that such remnants are what remains of once vital civilizations. I thought of this as a ruin—a rune?—of sorts, albeit a lively, brilliantly colored one that Stephen had evoked through a spare, signature lexicon of architectural elements, the basics from which structures could be constructed, destructed and constructed again as parables of eternal returns.

In its layout, I thought about how architectural his inclinations were, how sensitive he was to space, and how he constructed surfaces, but also rooms and chapels with light, with neon, with color, and with an array of simple but universal geometric shapes, inclining toward architecture because it is so tangible—and to light because it is not.

The joy of making is always evident in his work—and there is no mistaking the purity of that joy—which might in part consist of putting something out there that wasn’t there before, of drawing lines in space that transform into the dimensional, trailing a kind of aura.

His light was quotidian light and spiritual light. And it was historical light. It was the light of the present and future. It was both phenomenological and metaphoric. He treated it differently from other light artists of his generation and I believe he was the first to use neon extensively as an art material.

I remember the times he would show us his beautifully made models of chapels on display in his West Broadway studio—a project room, an installation in itself. He made over 30 of them but only one was realized as a completed structure—at least to date. That was the Chapel of the Heavenly Ladder, for the Venice Biennale in 1997, when he represented Greece. I remember how excited he was to show them to us (hard to think of that in the past tense), how wonderfully, infectiously excited he usually was to show us what he had recently made, what he had recently been thinking about, what he had recently discovered.

[Raphael, The School of Athens.] In Proscenium’s dynamism, as its forms and light pull you and your gaze around the vast Philip Johnson gallery of the Neuberger, it seems as if one component activates the next as a kind of relay—you can almost hear the sizzle at the points of transition—as a spark, a quickening, a kindling which made me think of human inventiveness, resilience, and aspirations.

Stephen knew something about old and new; it was part of his heritage, part of what he was, situated, like many of us who came here from older countries, between a more ancient heritage and one that was relatively new, and perhaps partially because of that, he was entirely at ease looking back while also looking ahead.

I have selected four architectural images more or less arbitrarily (the theater at Priene the Temple of Apollo at Delphi, Bernini’s Colonnade in Rome, and Raphael’s School of Athens in the Vatican—one of the most utopian spaces in the history of western painting) as examples that relate in a general way to Stephen’s work, starting with the circle, the half-circle, the incomplete circle and the line that becomes the column, that becomes a square, a rectangle that becomes a temple, a theater, a church, a chapel, a room. There is also the kinship of their great serenity and their embodiment of an idealized space and place.

I think Stephen liked the notion of taking neon – that had associations with the garish, the carnival, the carnal, the commercial – and changing it into something elegant, serene, immaculate, at times even holy. It tickled his fancy, his sense of mischief, I would think, but also his sense of completeness to equate temples and theaters. The temple lends its architecture to the theater which began as a more sacred space for rituals and the enactment of mysteries, before becoming secularized as venues for entertainment. But both are portals, stages, he reminds us, the proscenium signaling plunge into imaginative, intangible realms, separating it from the realities of the mundane.

He was always challenging conventional boundaries in art, in what an artist could make and how he could make it and with what. His impulse was multidisciplinary and synthesizing and he was prescient, in advance of the kinds of practices without borders that are so prevalent today. He strove to open his practice up, to keep it open, to always let more in, to let viewers in, to let the world in, to open up what was possible to make what was possible with the vocabulary that he had chosen, that was necessary for him.

It was curiosity that always led him on. Naomi Antonakos, his wife, says that Stephen never knew when he started where he would end up—he just wanted to see what might happen. And so he did.

Wei, Lilly, “Sizzling at the Points of Transition”: Lilly Wei on Stephen Antonakos,” Artcritical, May 3, 2018. http://www.artcritical.com/2018/05/03/lilly-wei-on-stephen-antonakos/