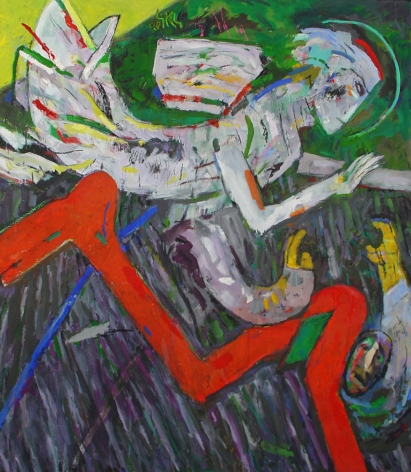 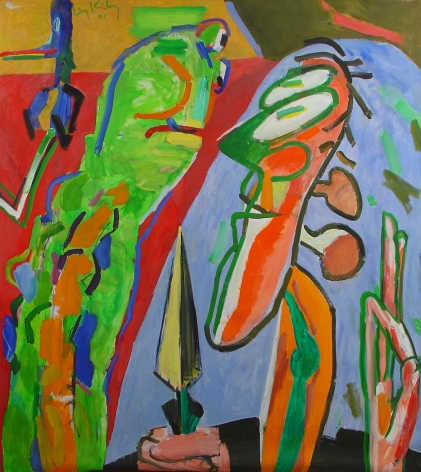 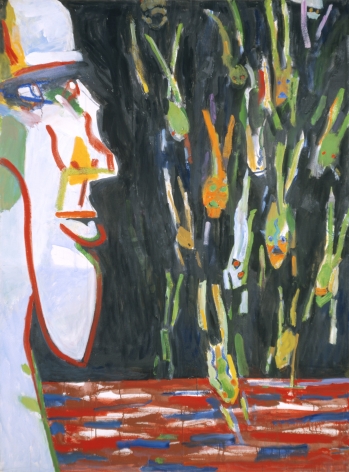 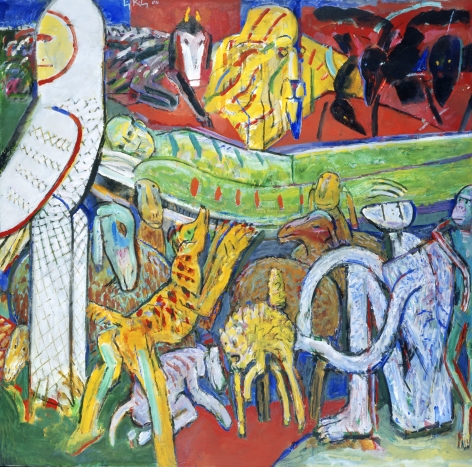 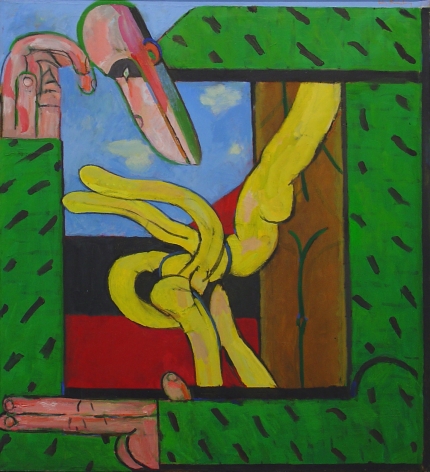 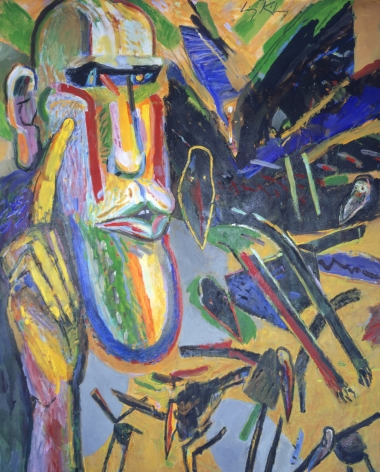 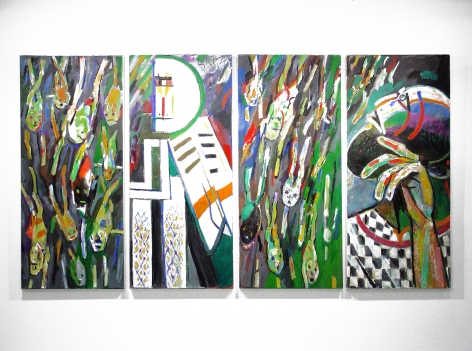 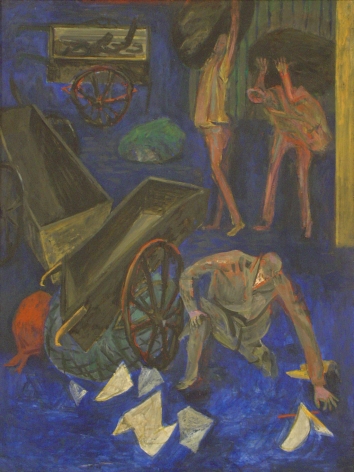 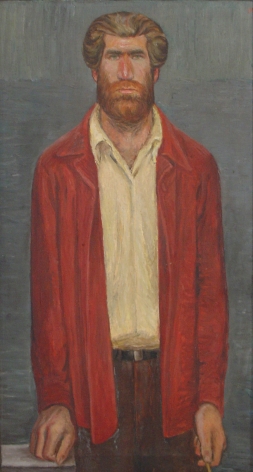 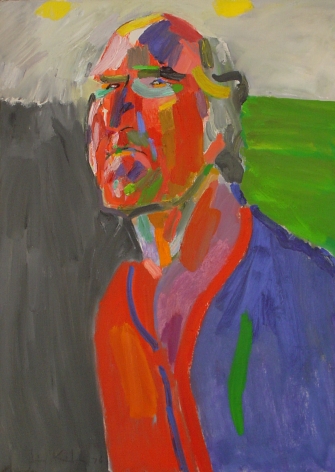 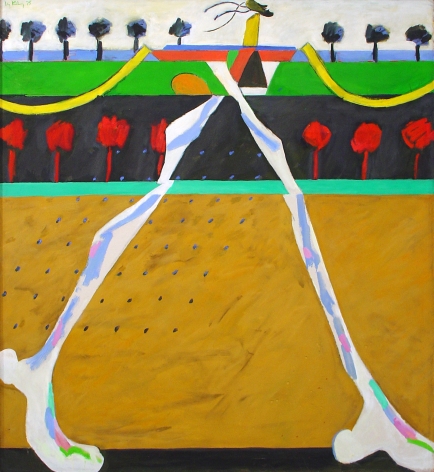 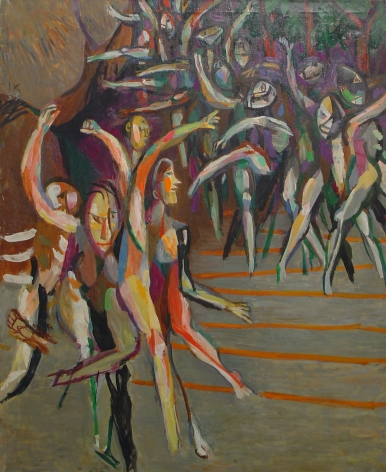 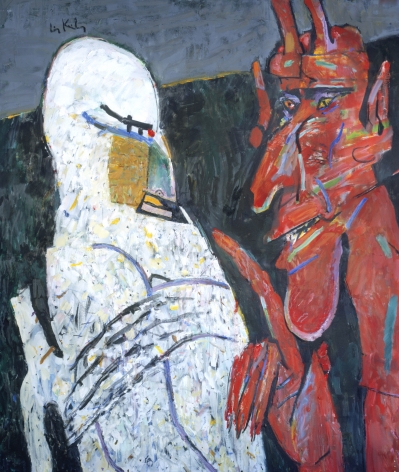 Lori Bookstein Fine Art is pleased to announce “Irving Kriesberg: Early to Recent,” a retrospective survey of more than sixty years of the artist’s long and prolific painting career. At age eighty-nine, Kriesberg continues to paint; the earliest painting in the show dates to 1943 and the most recent was completed this year.

Over the years Kriesberg has developed a distinctive brand of figurative expressionism in which it is possible to trace his roots as far back as the social realist influences of three years spent studying in Mexico in the early nineteen-forties (where he painted murals at the Ministry of Agriculture’s exposition building), as by the Abstract Expressionist ethos sweeping over New York in the early fifties. Neither, however, can fully account for the fantastical language of representation the artist has developed in his canvases.

Working with a protean cast of human and animal-inspired figures, Kriesberg’s paintings provide the stage on which his birds, frogs, monkeys—and many less easily classifiable beings—meet and interact. As tempting as it may be to interpret them as stand-ins or symbols, Kriesberg’s repertory of figures are not premeditated actors within a larger story, but images which come to him as direct responses to the contact of brush to support. The subject of his work is not the resulting image as much as it is the tension of representation and composition produced within it. Riffing on Rosenberg’s famous pronouncement, Kriesberg has said that “the arena is an abstract psychic field; the particulars of the drama matter less.” In essence, he confounds our notion of what is ostensibly “abstract” and what is “figurative.” There may be recognizable images before us, but they are first and foremost vehicles for personal expression.

Irving Kriesberg (born 1919, Chicago, Illinois) graduated from the Art Institute of Chicago before studying at Mexico City’s Escuela de Artes Plasticas and eventually settling in New York in 1945. In 1952, he was included in the Museum of Modern Art’s groundbreaking exhibition, “Fifteen Americans,” in which he was exhibited alongside Baziotes, Pollock, Rothko and Still. A steady exhibition career has included shows at the Curt Valentin Gallery, the Graham Gallery, the Martha Jackson Gallery, the Katharina Rich Perlow Gallery and the Peter Findlay Gallery; in addition he has participated in group shows at the MoMA, Whitney and Guggenheim museums. His work belongs to the collections of the Whitney, the MoMA, the Corcoran Gallery and the National Gallery. In addition to making conventional paintings, Kriesberg has conceived ludic “moveable paintings” and is a serious draughtsman and sculptor. This is his third one-person exhibition at Lori Bookstein Fine Art.

“Irving Kriesberg: Early to Recent” will be on view through November 15. Gallery hours are: Tuesday through Saturday, 10:30am to 6:00pm. For additional information and/or visual materials, please contact the gallery at (212) 750-0949 or info@loribooksteinfineart.com.